Facebook may be the big dog when it comes to driving traffic to local TV news sites, but Twitter is an essential tool now for creating online content.  Mark Becker has been a part of the reporting team at WSOC-TV in Charlotte, North Carolina for more than three decades. Often what ends up on the station’s website will have started with one of his tweets. 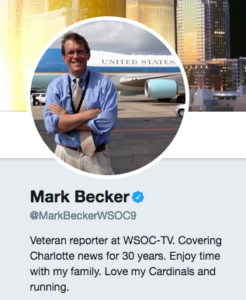 “If it’s a big story — a major breaking story or a big political story or even a local breaking crime kind of story, our web department will have already started posting stuff as soon as they can,” Becker said. “They’ll use some of my tweets to build what is essentially the first draft of the web story.”

Becker says later on, he’ll typically check in with the digital team to see what else he can do to help flesh out what’s been published.

“I may have gone out and spoken with somebody beyond what was said in the news conference or what I’ve tweeted out earlier, or I’ve gathered some quotes to flesh out the story.”

At WTVA in Tupelo, Daniella Oropeza says the reporters have quotas for their social media efforts, but that can actually be a help when it comes time to writing a web version of her story.

“The boss sent an email saying all MMJs have to send out five tweets a day plus two Facebook posts, and one has to be live,” Oropeza said.

The tweeting requirement has changed her whole approach to news gathering.

“I’ve gotten to the point where I use Twitter as a notepad.  Instead of writing everything down on paper, I’m using my thumbs.”

When it comes time to write stories for the station’s website, Oropeza says she usually has all the material she needs.

“I pull from my TV script and I tweet so much that I can use tweets as part of the story.”

Becker also relies on what he’s written for the newscast when he drafts his final web version at the end of the day.

“So, I’ll write my TV story and then copy that script, paste, rearrange and make it essentially what we used to call a newspaper story, a print story where people will not see the video as they read the story,” Becker said. “I have to change and describe, perhaps set up a little bit the sound bite that now becomes a quote. It’s just really finessing it, rearranging it.”

Becker says what he calls “the style factor” is important, too.

“If it’s out there on the web it’s out there. It’s not like you can pull it back. It counts just as much as the story that’s on the air. That’s the thing that I think that we all have to be careful about.”

This story was originally posted at AdvancingTheStory.com.